RYH submitted a "Memo to the Mayor" as part of the Education Transition Committee process. You can find our Memo here. The writing of this Memo was a collaborative effort by several parents and RYHers who have been active over the years. Our intent was to reflect what RYH has been advocating for since 2010. We also tried to incorporate the many things we've learned over the years, especially while working with so many community based organizations in various coalitions. Feel free to share your thoughts or feedback with us: [email protected]

UPDATED May 9, 2019: You can find a public, shared Google Drive folder which will serve as a record of the Education Transition Committee's work here. In the folder, you can find meeting materials, survey results, feedback from committee members, education memos, and other documents referenced and used through the transition process. After the Education Transition Report is released, there will be a copy in this folder as well. All Transition Reports will be presented to Mayor-elect Lightfoot on Friday, May 17.

UPDATED May 23, 2019: You can find the full Transition Report in English here and in Spanish here. It was published on May 17. There is an opportunity to provide feedback on the Transition Report. If you would like to do that, please contact Jennie via email ([email protected].) Note: All final feedback will be included on the public, shared Google Drive folder. All feedback is due by May 31, 2019.

UPDATED June 30, 2019: On May 31, we submitted this feedback on the final transition report.

At the February 27, 2019, unelected CPS Board of Education meeting, RYH delivered a parent research report entitled Improving Nursing Care in Chicago Public Schools: Creative and Meaningful Solutions Left on the Table. You can find the report here.

Below are the prepared statements from three RYH parents who delivered the report and explained the need for a complete overhaul of the CPS nursing design system. The fourth prepared statement below includes several questions from RYH on various CPS issues such as the ARA meetings, an overhaul of SQRP which hasn't involved parents, and implementation of a new IL CPS facilities law.

You can find 3 videos of our speakers, plus a video of the CPS BOE and Central Office discussion after our 3 speakers here.

RYH Bookclub! Winners Take All: The Elite Charade of Changing The World

We’re excited to be hosting multiple book groups of Winners Take All- The Elite Charade of Changing the World by author Anand Giridharadas over the next few weeks! 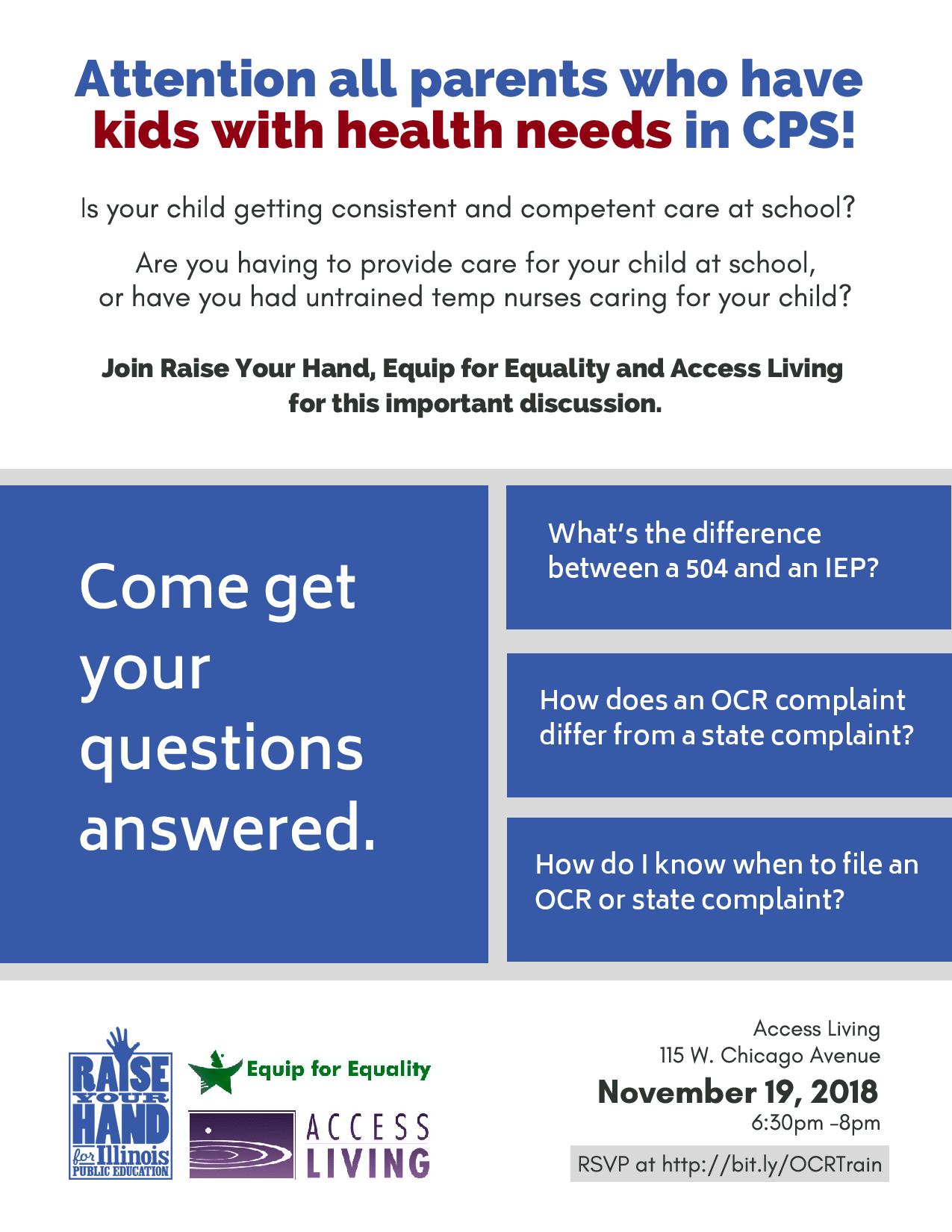 We sent this out as an email blast this morning. Sign up to receive email newsletters from us here.

Why support RYH at our annual fundraiser on Tuesday, Oct 2, 5:30-8:30pm? A note from a CPS parent & member of our fundraiser committee:

I have a photo from six years ago almost to the day: it's my family holding picket signs in the playground behind Ray School from when teachers went on strike over a longer school day and labor conditions. It reminds me of the school closing hearings, state budget fights, and assorted other CPS zaniness over the years. I believe Raise Your Hand keeps the people inside the Board of Ed building from going totally off the rails, which is one reason we helped plan a fundraiser to honor special education parents’ epic fight this past year and raise funds to support continued organizing on this issue and so many other issues on Tuesday, Oct. 2.

Rahm’s not running—What does that mean for the public schools?

We all got the stunning news yesterday that Rahm Emanuel isn’t running for re-election, and that means there’s going to be a new boss of the Chicago Public Schools in May 2019.  If you’ve read our newsletters over the past eight years, you know that in Chicago, the Mayor oversees the schools, appoints the school board, and selects the CEO of CPS. The primary election is in February 2019 but the next mayoral term doesn’t start until May 2019.

This Week in Ed 6.29.18: CPS to launch $3M “Office of Student Protection” an hour before the BOE meeting

CPS announced it would open a new 20-person, $3M department to respond to sexual abuse allegations right before the BOE meeting Wednesday. Unfortunately, this came as a surprise to the Inspector General who is supposed to be working in partnership with CPS on this issue. It’s also concerning that the legal department is in charge of launching this department, given the recent revelations that their department was routinely interrogating student victims of sexual abuse without a parent present.

You have all likely seen the horrific reports out of the Chicago Tribune by now, documenting hundreds of cases of sexual assault and abuse that have been reported to CPS over a decade but have never been made public before. The Trib said they had to threaten to sue CPS to get them to reveal the data they possessed, and it turns out CPS lawyers have investigated over 430 cases of sexual assault or abuse by CPS employees since 2011. These are just incidents that have occurred in CPS school buildings that have been reported. CPS acknowledged in the Tribune that they had no formal policies or procedures in place to deal with this, or to give schools firm direction on what they needed to do in the event that a student made a report.