Below is the spoken statement and the supplemental handout materials provided to the CPS Board of Education on November 20, 2019, by Marguerite Baran, elected parent representative of the Hitch Elementary LSC as well as the elected representative for the Northwest Region for the Local School Council Advisory Board, or LSCAB.

I first want to thank Board Member Dr. Todd-Breland for attending our LSCAB meeting this past Monday. I appreciate your commitment to your role and your interest in LSC relations!

As a newly elected member of the LSCAB, I have some observations and questions about how this body is being organized and managed, as well as leveraged by the Board and CPS.

In the past two years, there has been a lot of talk of the Elected Representative School Board for Chicago, which I support. However, none of these conversations include or address the existence of the Advisory Board, which is a body of six elected representative LSC Members and nine appointed LSC Members. This could be a missed opportunity for incubating what an ERSB could look like and accomplish.

Also, since being elected to the LSCAB, I have been surprised at the lack of transparency around the organization, even for elected members. In the supplemental handout I am providing, you can see that the LSCAB website lists members from 2017, not even including appointed mid-term replacements, and has not been updated for 2019. The Board Appointed Chair has not changed since the inception of the LSCAB over 20 years ago. The website does not have posted agendas or minutes. The LSCAB received an "F" grade from City Bureau for transparency.

My request of the new Board is to examine the Local School Council Advisory Board and see how to make it a thriving, relevant resource for parent and community engagement in improving our schools.

Thank you in advance for reviewing the materials I am providing, and I look forward to an update in the future.

What is the Local School Council Advisory Board?

State law created a Local School Council Advisory Board (LSCAB) to provide input to the Board of Education on LSC issues. The LSCAB meets once a month, usually just prior to the Board meeting.

The LSCAB has fifteen members who must be current LSC members. Six are elected by LSC members (one per region or cluster). The other nine members are appointed by the Board, which also appoints the LSCAB chair.

Questions for the Board of Education:

Questions regarding operations and oversight of the Local School Council Advisory Board:

Agenda from the Monday, Nov 18, meeting of the LSCAB:

Screenshots from the City Bureau Open Gov Report Card for the LSCAB: 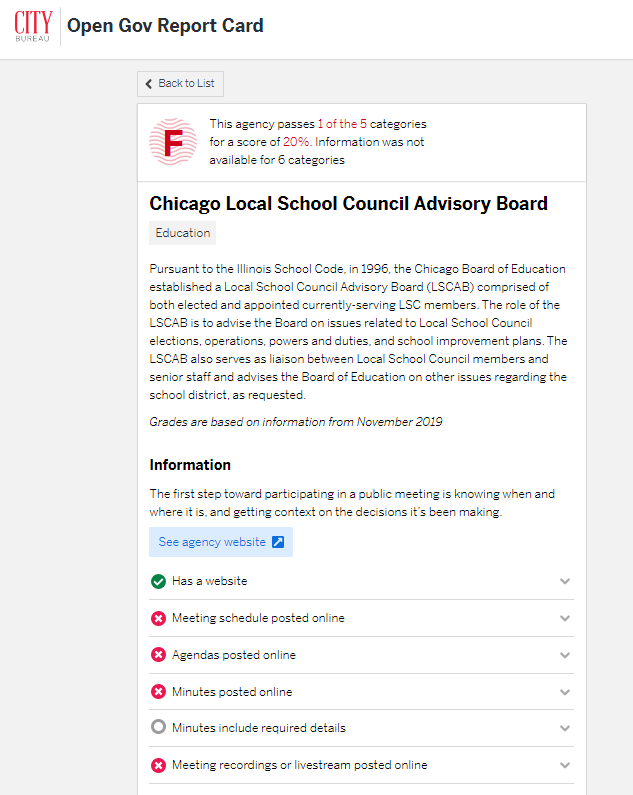